Due to the rarity of this artwork and mature content of many works on view, this exhibit is intended for adult viewers. Works on display may not handled by visitors, but may be shown by the gallery attendant by request.

Contact photobookworks@gmail.com to make an appointment or if you have any questions. 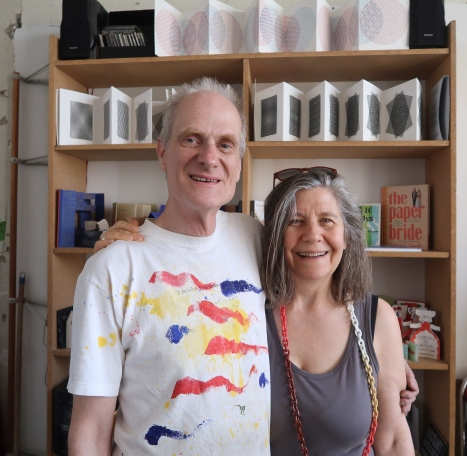 Purgatory Pie Press began in 1977 in Madison, Wisconsin when Dikko Faust pied (spilled) an overfilled job case of 8-point Century Oldstyle metal type. Dikko sorted that type for weeks, made his first two books and the paper for his third, and moved to New York City. In 1980 Dikko Faust married Esther K Smith and Purgatory Pie Press merged with the EK Smith Museum, a museum of found art, including The Apron Collection. Their wedding invitation was their first print collaboration. Dikko Faust uses letterpress as an experimental relief printmaking medium. Artistic director, Esther K Smith comes up with projects, designs structures, edits words, and stitches books. making limited editions and artist books. For some projects, they collaborate with other artists and writers. Faust and Smith bounce things back and forth. Starting with production limits–press size, paper size, number of colors/printings, they talk about approaches, Esther scribbles something on paper. Dikko hand-sets wood and metal type and proofs the words. Smith cuts up the proofs and pushes elements around on paper the size of the finished piece. Dikko arranges that design on the press and proofs it. They tweak spacing, try colors and papers. An accident can solve a design problem.

One night, researching on-line for his CUNY Non-Western Art History class, Dikko had EUREKA! moment. He saw a 3-color pattern in the oldest known wall-painting (c.9000 BC!) He began drawing this pattern on every available surface, set it in type–and his tesselation series began.

Dikko in his new studio in the Brooklyn Army Terminal.         Photograph by April Vollmer

Esther K Smith’s How to Make Books, (Random House 2007) is now a classic text for teaching and learning book art basics and remains one of the most popular books on making books. With charming designs and illustrations, Esther guides makers through the steps for various forms while encouraging originality and experimentation. Magic Books, (Potter Craft, a division of Random House 2008), offers instructions for a variety of more complex books such as accordion books, pop-ups, map books and other forms, with clear instructions for the beginner. Limited copies of these two books will be available for sale and signing the evening of the opening. 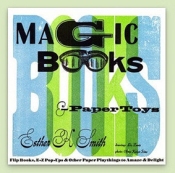 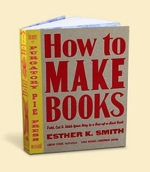 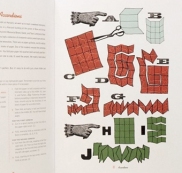 Esther’s sixth and most recent book is the fabulous facsimile copy of Specimens of Chromatic Wood Type, Borders, Etc. (Rizzoli International Publications (2017). Originally published as a catalogue for William H. Page’s Connecticut wood type foundry, considered one of the best in the world in it’s day, this 1874 type specimen book features elaborate display typefaces meant for eye-catching posters and advertisements. Long out of print and rare, Esther’s 21st Century edition with essays and history, will be featured in the July 14th Second Saturday workshop at the Traffic Street Press studio adjoining No.3 Reading Room & Photo Book Works. (See below for details). 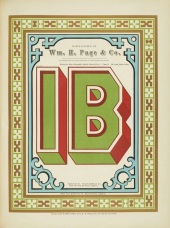 Limited copies of Esther K Smith’s book arts books will be available for purchase and signing at the opening, along with Purgatory Pie Press limited editions,  small works, subscription series postcards, artist books, posters and prints from their archive.

Faust and Smith travel as visiting artists, lecturing, demonstrating, and making collaborative projects in art centers and universities. Faust teaches letterpress at School of Visual Arts, NYC.  Smith had taught the long-running Artist Books course at Cooper Union–and now offers workshops at museums and for small groups and highly qualified individual artists. After decades in Tribeca, their studio has just re-located to the landmarked Cass Gilbert Brooklyn Army Terminal, accessible by ferry among other forms of transportation.

Esther and Dikko will be present in the Reading Room July, 14th from 1–8 pm to chat and sign books. A special studio workshop/demo will also take place on Saturday, July 14. See details below. Don’t miss this special opportunity to see this amazing work and meet the artists!

Please join Esther K Smith, Dikko Faust and Paulette Myers-Rich at Traffic Street Press, 469 Main St., Beacon, NY, for an hour-long in-studio demonstration and discussion of how wood type and color is used in the letterpress printing process for signage and broadsides, with special attention paid to the use and history of chromatic wood type. Attendees will receive a signed copy of the broadside printed during the demonstration, which will also be for sale later in the evening. Space is limited to six participants each session, first come first served. Please register by July 12.

Two sessions will be held on Saturday, July 14th

Please indicate which session you prefer or if either is fine and you will be notified if there is a space available upon inquiry. Payment in full reserves your seat; Register by email inquiry at:  photobookworks@gmail.com